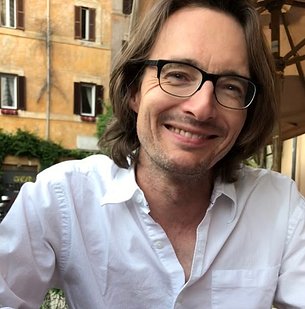 A paper given at George Mason University, VA, 22 February 2016

The German composer Wolfgang Rihm (b. 1952) was known in the 1970s and 80s for his overt and
multi-layered connection to the music of the past. Integrating German Expressionism with blatant
bursts of Neo-Romanticism, he composed music that simultaneously evoked the likes of Schoenberg
and Stockhausen alongside that of Schumann and Wagner. Through brief analyses of excerpts from
his third, fourth and ninth string quartets, one sees how this composer's music transforms from a
language wrought with rich connections to the past, towards a more personal, refined and mature musical
voice.

"Time and Notation in Selected Works of Boulez and Dutilleux"
(2015)

The connection between music notation and musical time has been a topic of major concern for many
composers of the past century, and remains so today. Certain composers have come to find their own
idiosyncratic techniques to address this relationship; Cage and Lutolsawski employed similar solutions
involving aleatoric approaches, while others such as Carter and Ligeti remained in the realm of conventional
metric notation. However, the question of notation does not always determine the particulaar relationship
to musical time.

In this paper I consider details in rhythmic notation in selected scores by French contemporaries Pierre Boulez
and Henri Dutilleux, and compare them with their composer's aesthetic positions and theories; the former's
stemming from his writings on the stratifications of musical space and time, proposing categories of smooth
and striated musical spaces, and the latter's theory of croissance progressive, progressive growth, as a principal
method of composition. I will show that depsite their distinct aesthetic positions, these two composers share
particular commonalities in the sound worlds that their respective notational solutions create. In so doing, one
can come to better understand the relationships between notation and musical time.

The music of Wolfgang Rihm is often described as abstract and improvisatory in nature. As such it is often difficult
for listeners to conceptualize a clear formal design. Although several writers, such as Brügge and McGregor, have
offered insights into Rihm's work, the composer offers these two intriguing statements: one, a sound following a
different sound in time, truly transforms its predecessor; and two, the act of composing is itself a hunt for the form.
This paper aims to reconcile Rihm's statements on his compositional approaches with techniques and formal properties
found in the first major section of this quartet. The analysis shows a variation structure that gradually disintegrates,
giving way to a rising dominance of new material. This dual nature formal plan creates a decidedly unique musical form;
a form that is constantly hunting for itself and by which is constantly transforming into a highly directed and distinctive
musical expression.

"Nor gates of steel so strong, but Time decays?: compositional technique, form, and temporal experience"
(2012)

In 1971, Robert Ornstein confirmed Stockhausen's intuitions of fifteen years earlier that a listener's ability to estimate
duration proportion in music is highly dependent upon the amount of information stored in one's memory pertaining
to that interavl of time; or, in Stockhausen's terms, the "temporal density of unexpected alterations"1. B. M. Williams
writes that a particular psychological music-temporal experience can be induced if the "the composer has techniques
at his command which entice the listener to lose his awareness (or the forceof his awareness) of time as measured in
some regular and neutral way"2. Yet there is no body of literature or school of composition that explicitly confronts
these issues of potential time-manipulating techniques, leaving composers to their own devices to discover techniques
typically through now ancient notational conventions, which ultimately function in relation to linear-directed thinking
and ordered clock time relationships.

This lecture-recital will present an original analytical approach to show connections between compositional techniques
and thoeries of temporal perception within my recent solo piano composition, Nor gates of steel so strong, but Time decays?
(2010). The results exemplify ways in which today's composer might correlate our contemporary conceptualizations of the
temporal experience with compositional technique, thus illustrating strategies with which musical forms of a temporally
conceived nature can be realized. Following this presentation, I will perform the work with a formal diagram projected,
showing the above analyses' results and proposed implications.

This study investigates the particular integration of drama and music into the unique genre of opera through the common
element of time. Its aim is to offer new conceptualisations of time in opera that will provide composers with tools to
understand and control various aspects of the temporal dimension within the genre. On the basis of four proposed types
of artistic time, issues related to formal organisation, continuity, discontinuity, and the perception of temporal proportions
are discussed in relation to music, while the nature of narrative and temporal representation are considered in the realm
of drama. This text shows how the temporal multiplicities inherent in both music and drama occur simultaneously and
often in apparent conflict with one another. When combined, music and drama’s individual temporal properties create
Operatic Time, and in order to account for the various resulting possible combinations I offer categorical systems based
upon historical references, and issues of temporal unity. Lastly, I propose a particular conceptualisation of how time
advances in opera based upon the temporal function of text, and present an original analytical system that I call Text
Index Series Analysis. With it, several opera excerpts from the last century are analysed and the results demonstrate
various approaches to pacing and their effect on music-dramatic temporal meanings within any given work.

Read the complete dissertation at Library and Archives Canada.

Site-specific opera are those works which are either composed for, or produced in (or both) a prescribed space other
than that of the opera house. The particular site chosen for the production of such a work has a profound effect on how
that work of art is received. Questions are raised with regard to the work’s meaning and its relationship to the time and
place of the site in which it is performed. In order to better understand the spatial and temporal richness within site-
specific opera, recent productions of European and North American operas from the nineteenth and twentieth centuries
are considered. Based upon composer/librettist intentions, the site of the premiere production and its relation to the
music-dramatic work, five types of site-specific opera are proposed.